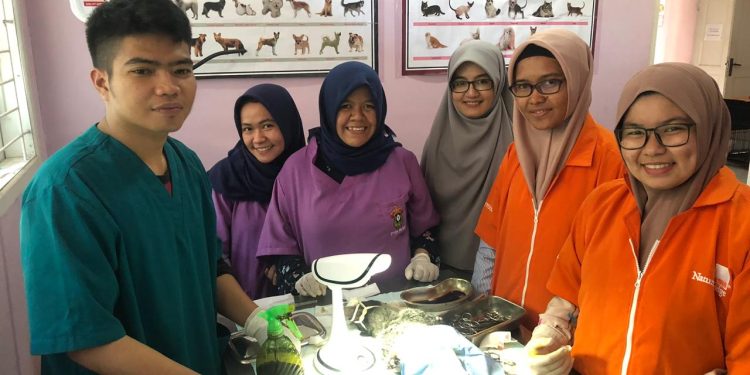 According to liputan6.com, there is a sort of beverage in Indonesia that is often referred to as “Primadona Coffee,” namely Luwak coffee. This coffee is created by civet creatures that are able to select and devour only perfectly ripe coffee beans. During digestion, only the coffee skin is digested, while the coffee beans are eliminated with the stool. The coffee beans produced have a distinctive scent and flavor and are in high demand.

Fitri, a student at Hasanuddin University (Unhas) who was awarded a Masters Education Program scholarship toward a Doctorate for Superior Degree, published research titled “Arabica Coffee Fermentation Using Lactic Acid Bacteria From Digestive Luwak (Paradoxurus Hermaphroditus)”. In this work, she discovered an alternative method for producing civet coffee without the digestive process. Because coffee is derived from animal excrement, she observes coffee buyers who question its cleanliness and halal status.

In addition, the rising demand for civet coffee has led to a rise in civet animal farming. This threatens the survival of mongooses in the wild. “Sustainability is at risk since these animals are classified as omnivores and coffee beans are not their primary source of nutrition. As a result, mongooses frequently die in this manner,” she stated during a Sunday (16/04) Whatsapp interview.

Since 2010, this study has been conducted, however there are still certain problems, such as the low taste value and the two-week fermentation period. In contrast to the traditional procedure, which takes 24 hours, the mongoose digests and excretes food within 12 hours.

This is why he then brought up this research. A literature review is conducted to determine which microorganisms are present in the coffee bean fermentation process. She discovered that Lactic Acid Bacteria were present in the civet’s digestive tract (LAB). This kind of microbe is also utilized in the fermentation of milk, cheese, and other foods.

After locating the desired bacteria, she and the Unhas Education Veterinary Clinic team collected samples of germs from the colon wall and civet excrement. The sampling was conducted in accordance with the appropriate code of ethics since the species is classified as Appendix III by CITES, meaning it is protected in both its region of origin and its area of dispersion.

“Therefore, when I took care of the permit, it was a condition that the mongoose be in excellent health and alive after surgery so that it could be returned to captivity,” she explained.

After obtaining a sample of the desired bacteria, lactic acid bacteria (LAB) are separated from other undesirable bacteria in an isolation step. This is followed by a number of further tests, such as the gram stain and acid resistance test, to check that the bacteria isolated are as predicted.

The Alumni of Food Science and Technology Unhas then evaluated three enzymes that have a role in coffee fermentation: cellulose, lipase, and protease. These enzyme-producing bacteria will be utilized to create starters. This starter is the bacteria responsible for coffee bean fermentation. Comparatively, the concept is same to that of preparing tempeh with yeast as a starter.

“After investigation, it was determined that fermented items were best handled with 1% starter for 18 hours, which was somewhat longer than the initial technique but produced superior results,” she stated.

The mongoose is the challenge encountered. Prior to surgery, the civet must be in optimal health, which includes not being agitated or ill and ingesting coffee beans to produce the right microorganisms during digestion. In addition, LAB requires special consideration due of its sensitivity.

“We must determine what the bacteria require, as various LABs must be handled differently due to their varying optimal growth temperatures,” she explained.

His investigation revealed that the cupping test, which measures the aroma and flavor profile of a coffee bean more precisely, had a value of 86.52. This value is greater than natural Arabica coffee (83.84) and authentic Luwak Arabica coffee (83.84). (85.09). The value exceeded his pre-research estimates.

Fitri believes that this study will be continued and employed in the civet farmers’ primary sector. This process may be utilized on a commercial scale, according to him, if the expense, length of time, and other factors of producing Kopi Luwak are explained.

“It’s not like it takes a lot of time and money, because the most essential aspect of the fermentation process is to obtain the desired bacteria,” she added.